Fast track your fitness with this English language version of the 7th Set of Broadcast Gymnastics from the early 1990s. Each exercise works a particular range of motion and thus, overall, this routine provides good, gentle exercise to all body parts – in other words: Quick Calisthenics!

I first produced a version of this book some years ago now and called it: “4 Minute Calisthenics: A perfect beginner’s bodyweight-only strength building program!” Not that catchy, but the issue was that not many people were talking about calisthenics at the time, and even bodyweight training was a very small niche category. Now, of course, people are catching on to the benefits of gentle bodyweight exercise you can do every day. I figured the time was right for a reboot, and so we have Quick Calisthenics.

Calisthenics basically refers to standing body-weight training. They will increase body strength, body fitness, and flexibility, through a range of movements. When performed vigorously and with variety, calisthenics can provide the benefits of muscular and aerobic conditioning, in addition to improving psychomotor skills such as balance, agility and coordination. In other words – they’re AWESOME! The calisthenics I am referring to here, however, are not the same as super high-intensity stuff you might see elsewhere on the internet. ANYONE can do these exercises or at the very least some variation of them. 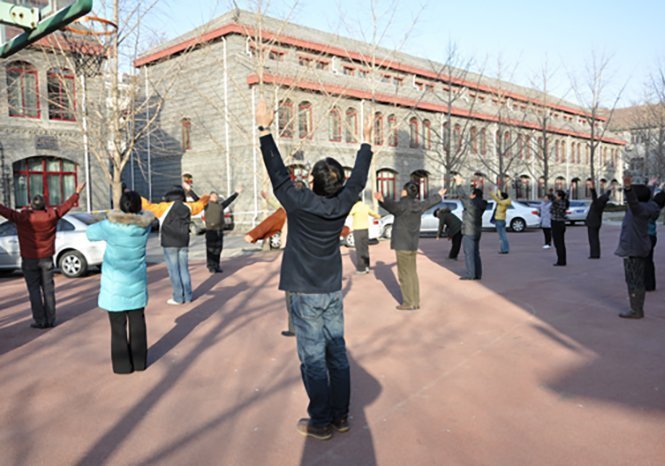 This is a version of the famous Chinese ‘broadcast gymnastics’ from the early 1990s (known as the ‘7th set’). As with all the broadcast gymnastics routines, these exercises were the subject of rigorous testing to produce a moderate-intensity exercise routine that had a positive effect on motor skills (in that they required the integration of muscular, skeletal and neurological functions).

Each exercise also works a particular range of motion and thus, overall, the routine provides good, gentle exercise to all body parts. The large muscle groups are all utilized, lubricating all the joints in the body, and improving circulatory and respiratory fitness.

The aim of this broadcast gymnastics exercise routine is to improve the operating system of the human body – and aren’t you due an upgrade?

Unlike some of the later sets (one of which is our Chinese Radio Exercises) this set is perhaps the one that best typifies ‘old school calisthenics.’ It is simple to learn, quick to perform AND it feels really good. That’s why we chose it!

What is included in Quick Calisthenics

There are simply 13 exercises (13 is actually a lucky number in China) that you one after the other. There are a suggested number of repetitions, but you can adapt it to suit your own needs. As always there are elements of:

Basically, all ANY exercise program needs. 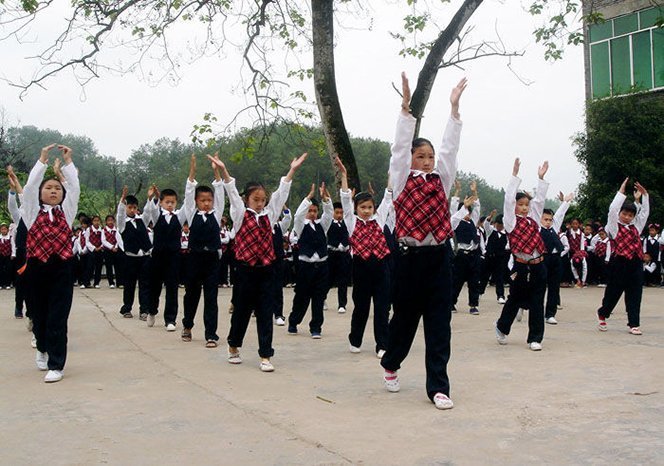 Can I only do these exercises in a group?

Of course not. Personally I first started doing these exercises because I wanted something I do on my OWN and in PRIVATE. All you need is a tiny little bit of space and a couple of minutes!

I’ll have a go later…

Before clicking off this website and going about your business, do me a favor. Have a go. Have a go at ONE exercise. If you don’t like it and can’t conceive of any benefit it having, then fine. But I am confident you’re going to like it!

Let’s literally start at the beginning and perform the first exercise: The Slice. Richie is back demonstrating this routine after his exertions on the Daily Dozen:

Like ANY exercise routine, you want to start with a gentle warm-up and stretch. This routine starts with something I have named The Slice. This is a torso twist with the addition of an arm swing. This movement is going to help stretch and pull the muscles of the upper body nice and gently.

Stand with your feet together and your arms by your sides. To give you a little more balance, turn your feet out slightly, so when you look down they are in a ‘V’ formation. Your hands are on the outside of your thighs, with your thumbs curling around to the front.

To begin with, just breathe. Stand tall (rotate your pelvis forwards slightly which will bring your stomach in and push your chest out, and keep your shoulders well back), close your eyes and SMILE for a moment or two. Enjoy the moment, and enjoy the anticipation of what you are about to do.

Now open your eyes and begin.

Only turn as far as your waist will allow without it having to rotate itself. Everything below your pelvis should stay facing forwards during the whole of this exercise…