You may have heard of the Metropolitan Life Insurance Company, but did you know nearly 100 years ago they sponsored 15-minute exercise transmissions that they referred to as “The World’s Biggest Gym Class?” Join the fitness revolution which influenced almost all the current radio fitness programs in Japan, China and around the world.

Health exercises – now there’s a phrase that isn’t used as often as it should be. We talk about shredding exercises, and HIIT exercises, and 1001 other types of ‘exercise’, but rarely health exercises. Perhaps because people get this vision of rehab exercises in a hospital or exercises for the elderly or the feeble – but this is ridiculous! Too many people are shamed out of developing a healthy exercise routine because they are ‘too out of shape’ or ‘afraid of hurting themselves.’ I never think these are excuses, I think these are valid concerns. A good exercise routine should only ever make you feel better about yourself – not worse! One of the first (and in my opinion, still one of the best) daily exercise programs to really push this idea of ‘health’ exercises was sponsored by the Metropolitan Life Insurance Company in the 1920s.

Before there was Radio Taiso there were Metropolitan Life Health Exercises!

Given that we think of this type of radio calisthenic exercise as originating in Japan or China, it’s probably surprising to discover that the pioneers of radio exercise were in fact American. By the mid-1920s, inspired by the popularity of Walter Camp’s Daily Dozen (which was turned into a best-selling record set as exercise to music / verbal instruction increased in popularity), there was a growing selection of radio stations offering a radio exercise program of some kind. Perhaps the most popular and longest-lasting was sponsored by the Metropolitan Life Insurance Company.

From 1925 to 1935 the “Tower Health Broadcast” would start at 6.45 AM, and feature a selection of exercises that were set to music. The Japanese have it a little tougher today as their radio instruction starts at 6:30 am, but the format is exactly the same as all those years ago: a series of exercises, set to music, with instructions from an encouraging voice.

Remember, Internal Force Fitness stock instructions for the 3 Radio Taiso routines: one to increase strength, another that is suitable for all ages and a further for the elderly or disabled which can be completed whilst seated. I don’t think anyone can argue that senior citizens in Japan seem to stay ‘younger’ for longer, so why not look into what they do that you don’t!

I’m not going to dwell on the past – if you want to learn more, I suggest you read this excellent post online: http://schugurensky.faculty.asu.edu/moments/1922%20RadioHealthHalper.pdf

Basically, the aim of these broadcasts was (and in Japan still is) to encourage listeners to start the day with SOME healthy activity – and what better way than with a series of ‘setting-up’ exercises; literally designed to set you up for the day (if you think you’ve seen that phrase on this website before, that’s how Walter Camp described his Daily Dozen).

This is what I’ve broken down into its component parts for you: 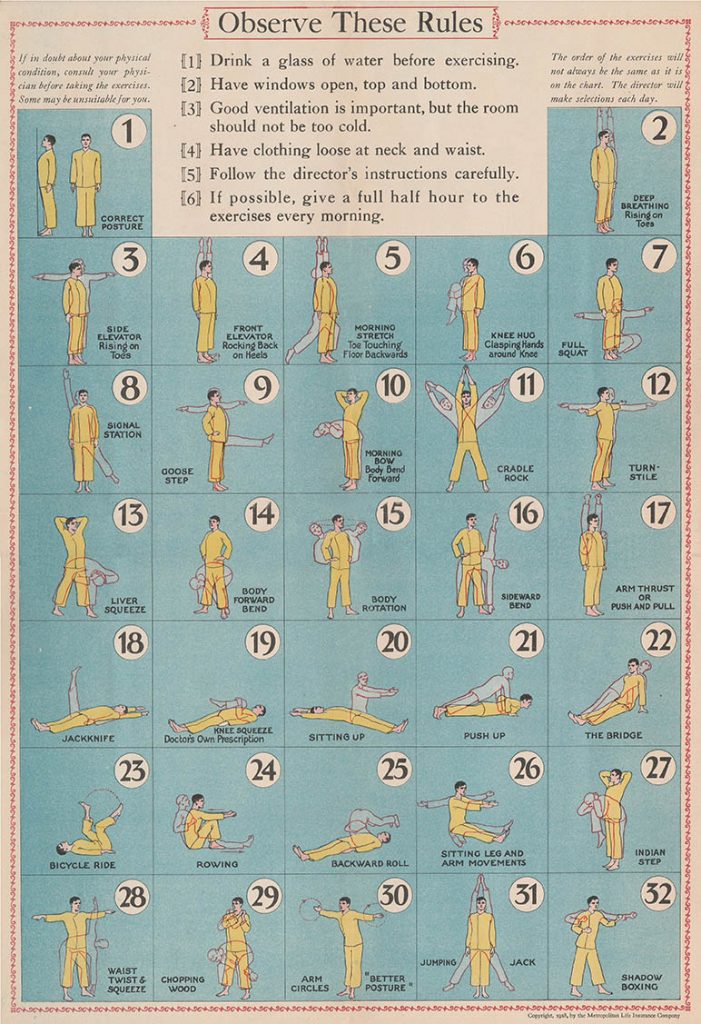 Internal Force Fitness has taken the exercises from the chart above and made a NEW training guide for you to download. As well as explanations of the individual exercises, there is a training schedule to keep your body guessing as you perform different exercises every day of the week!

Perform each exercise for a minute, rest for thirty seconds or so in-between exercises and in under ten minutes, you’re energised and ready to go and conquer the day!

Join the fitness revolution that started nearly one-hundred years ago, and which influenced almost all the current radio fitness programs in Japan, China and around the world.