MAO 4 is a re-imagining of the People’s Republic of China exercise plan, famous for a time as ‘Chairman Mao’s’ 4-Minute Exercise Plan. As a great warm up routine, this series of exercises found its way into drama classes across the WORLD.

MAO 4 (which I thought was a bit catchier than Chairman Mao’s 4 Minute Fitness Routine) is worth a look because PERSONAL physical fitness has become one of THE talking points of today’s society. I don’t think anyone can deny that when you are physically fit, you are able to do more things. How to get hard-working people into a place where they can find the time (and DESIRE) to exercise however has been a question posed by government departments for generations. Equally, how can you motivate the young, the elderly, and the unemployed to do something when they don’t have the money or the means to learn? After all, we can’t all nip out for that daily 11 a.m. Pilates class, right?

The answer to improving PERSONAL fitness might actually lie in the concept of GROUP fitness.

In the West, we tend to think of ‘national exercise’ as being an Eastern thing (we’ve all seen groups of Chinese people exercising in a park), or even something associated with the Hitler Youth where huge rows of the ‘Aryan elite’ would perform perfectly orchestrated calisthenics. The truth is perhaps a little more surprising.

Back in the 1920s an American insurance company promoted something called ‘Metropolitan Life Health Exercises.’ The Metropolitan Life Insurance Company ran ‘The World’s Biggest Gym Class’, broadcasting daily radio instructions to MILLIONS of people. The insurance company wanted people to stay fit so they would not have to pay out, and for the people to live longer so they could pay more premiums! Along with record sets such as Walter Camp’s Daily Dozen, the American population was spoilt for choice in terms of ways to get their daily fix of fitness.

It was these calisthenic routines that were taken to Japan and adapted for their own population. This is where things get complicated again. During this period Japan was embarking on a difficult period in its history, culminating of course in the devastating events of 1945. The Allied forces deemed these exercises too ‘militaristic’ in nature and so they were banned for a time.

By the early 1950s however, and after some rewrites, these calisthenic exercise routines re-emerged in Japan (see: Radio Taiso) and also China. America had moved on to a period of prosperity where radio exercises gave way to Jack LaLanne on TV and a nation just kind of lost interest.

This book is going to take a look at the routine that eventually came out of China, and found its way into drama classes all over the world. Divorced from politics and history – just the exercises!

This routine is a re-imagining of the People’s Republic of China exercise plan, famous for a time as ‘Chairman Mao’s’ 4-Minute Exercise Plan.

Way back to just after the first World War Mao Tse-tung (later to become Chairman Mao) wrote a paper called “A Study of Physical Culture.” Now I have no desire to get into the political side of mass exercise, but consider this:

“He could see the degeneration of people due, in part, to lack of physical fitness, and he began to question how physically unfit people could assume responsibility and act effectively in life.”

Is that not the SAME question we are asking ourselves now?

The plan’s aims were simple:

Is this a TOTAL exercise plan?

If you want to describe a total exercise plan as one that means you have no need to do ANY other exercise then no, and I don’t think such a plan exists. This is an exercise plan that is going to make you FEEL good. It is going to improve flexibility and muscle tone. It is going to set you up for the day! All that you need to do to make it into an even BETTER program is to add some brisk walking or some other kind of outdoor activity.

Remember too that these exercises are ones you can do EVERY DAY! You can do them in the morning, at night, for multiple repetitions, and in isolation during the day as you need to. No-one needs to know, no-one needs to see, it is YOURS!

What is Included in the Exercise Routine?

To be a full-body exercise routine, it, of course, needs to work the whole body. Therefore it is going to cover:

This is Syd, and he is going to be your guide throughout the book: 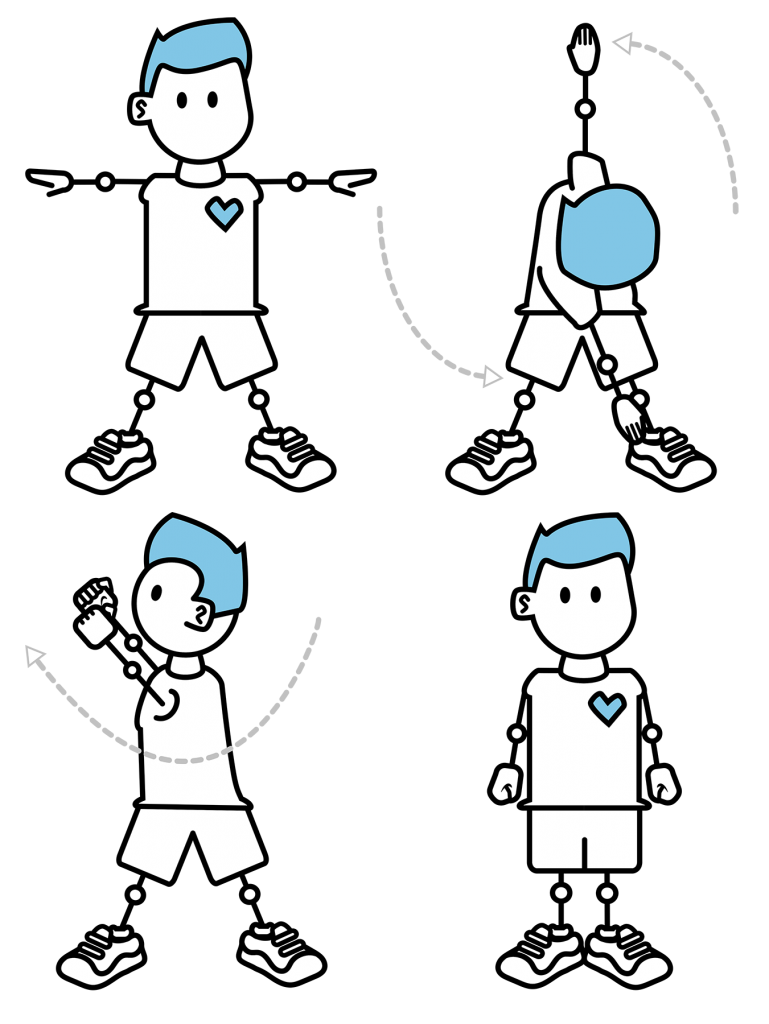 One of the exercises is called “Punching the World” and some days, punching the world feels mighty good!