Korean Daily Stretches for Fitness and Grace are actually a version of what is called Korean National Gymnastics, a program of standing body-weight only exercises

Korean Daily Stretches for Fitness and Grace are actually a version of what is called Korean National Gymnastics, a program of standing body-weight only exercises that were developed to:

[I]mprove the physical strength of the nation… promote a healthy and cheerful society, and give unity to the people.

I’ve paraphrased slightly, my Korean is not good, but you get the idea. Much like the other daily programs I have featured on Internal Force Fitness so far, in essence, these routines were developed to keep a hard-working population fit and healthy. I have mentioned elsewhere my desire to divorce these programs from any militaristic and political terms, so I ask you to do as I do and just take this routine at face value – it’s a program of exercises to make you feel better! In fact, rather than call it national gymnastics or whatever, let’s just refer to it as a really well-made stretching routine!

South Koreans LOVE to stretch. They will stretch at completely random intervals during the day, be it against a tree or a bench – it doesn’t matter. An awful lot (TOO many in my opinion) of calisthenics programs put an emphasis on never-ending repetitions of push-ups, pull-ups and squats, rather than just natural stretching and moving. Of course, that IS one way to look at and define calisthenics. I prefer this one, however:

“[G]ymnastic exercises to achieve bodily fitness and grace of movement.”

Doesn’t that sound great! I would take bodily fitness and grace of movement over throbbing biceps and burning thigh muscles. To get modern versions of this kind of exercise it is necessary to look to countries such as China, Japan, and Korea – countries where the concept of DAILY exercising is ingrained in the public psyche. So that is exactly what I did – in this case, South Korea.

To show just how simple this routine is, here is the official chart with the movements on – just ONE sheet, you can do one sheet worth of exercises every day, right? 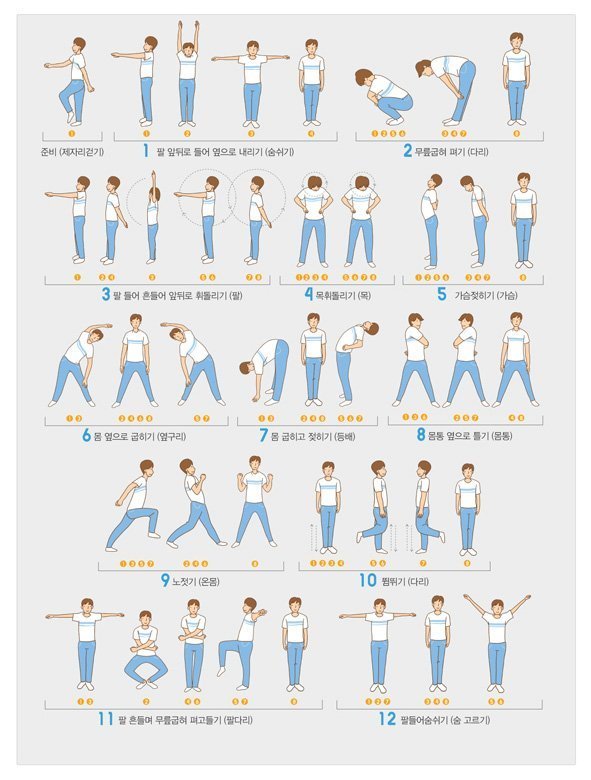 This is not some huge ‘feel the burn’ or ‘High-Intensity Training’ workout. Of course, some calories are consumed, but really you are just going to be operating at the level of a brisk walk – which, I might add, is a perfectly good level to work at!

Nonetheless, after performing these 12 different (and simple!) exercises, you’re going to see the effects of stretching the arms, legs, torso, and neck just a few degrees. 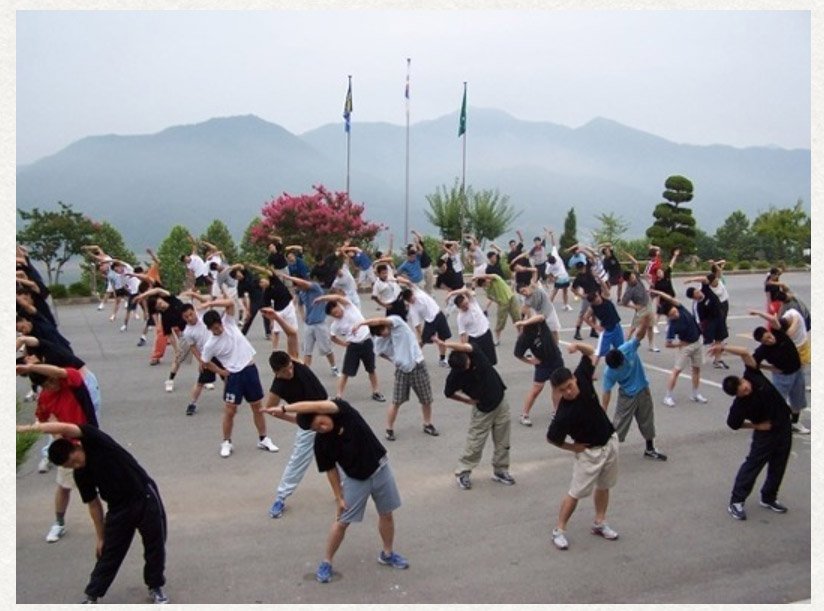 Stretching Exercises You Can do Anywhere

The pace of modern life means people are lacking in the stretching department – despite the grind of modern life making stretching more important than ever. So many people sit at their desks staring at a monitor all day, look at their mobile phones during break-times, then go home and sit and stare at their TV. There ARE people who set aside time for exercise, but many people do little to nothing because they simply don’t know HOW to.

This exercise routine was designed to get you maximum results in the shortest space of time – that’s why it’s one of my favorites!

This is Mandy, she is going to help you out by demonstrating the movements: