Commando Self Defence by George F. Jowett was printed under the name: COMMANDO OFFENSIVE-DEFENSIVE TACTICS SIMPLIFIED – An Outline Course by George F. Jowett, President of the Body Sculpture Club, and is a welcome addition to our George Jowett section.

Commando Self Defence by George F. Jowett was printed under the name: COMMANDO OFFENSIVE-DEFENSIVE TACTICS SIMPLIFIED – An Outline Course by George F. Jowett, President of the Body Sculpture Club, and is a welcome addition to our George Jowett section. It’s actually the first document I have reproduced that I feel I have to WARN people about. Not just the normal “please check with your doctor before doing any strenuous exercise” type warning, but a “please don’t go out and copy what you read in this document” type of warning. Jowett himself makes a statement along these lines too, and it is worth printing here:

This advice, therefore, is for real emergency when you are attacked by someone who means to do you an injury. Here, then, are the secrets every citizen should know in order to defend himself when attacked by a ruthless assailant.

Yes, Jowett does talk about ruthless assailants. and thugs, and “plug-ugly” bullies. This short course is packed with fantastic language like this, and tell me you don’t want to be like Jowett describes in the very first paragraph:

“The famous Commandos of the Allied Forces in the late War, whether they were British, American, Greek or Polish fighters, were the toughest men on two feet. They were graduates of the original Commando system as taught by expert Allied Commandos and so became demons in combat – absolutely unconquerable! How are these Commandos produced? First, they are superbly trained physically to a degree that makes muscles and sinew in their bodies as tough as whale-bone. This enables them to withstand the most extraordinary hardships without fatigue. When such a body is coupled with the Offensive-Defense tactics, its owner is utterly fearless and woe betide the assailant who clashes with them, for he just can’t win. The object of the Body Sculpture Club is to make you just like them – Commando Tough, so that you, too, can step out into to world with a superbly built body and with the invincible ability to protect yourself against any foe regardless of his size.”

Here is what I was working from with this reproduction, but as always the PDF is a fully formatted, typed, cleaned-up version – which MAY take away a little bit of the charm, but NONE of the great advice, excellent writing and AWESOME pictures. 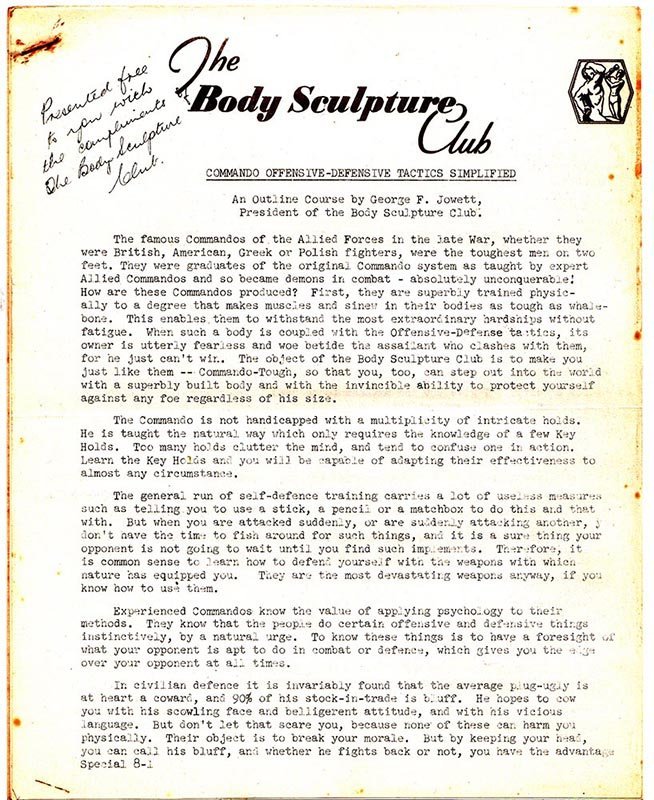 Commando Self Defence is arranged under the following headings (just to whet your appetite!):

In case you’re wondering how to beat “the Strangler” – this is how: 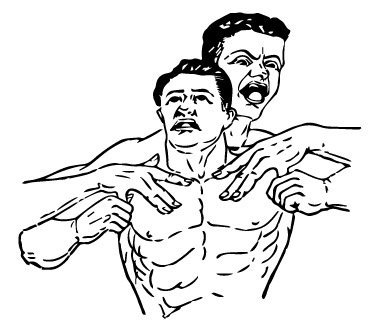 How You Can Beat the Strangler

Jowett makes a couple of mentions of putting your opponent “hors de combat.” You can probably guess what it means, but in case you don’t, it simply means “out of action due to injury or damage!”

I urge you to read up on the history of the Commandos, as Jowett’s description of them is pretty spot-on. For example, the Army Rangers (in their modern incarnation) were inspired by them!

Incidentally, Jowett seems to have been very keen on being strong as whalebone, and why not, when whalebone was known for its lightness, strength, elasticity and flexibility. He mentions it too in the Body Sculpture Magazine (along with being ‘husky!’)